I’ve spoken previously about my belief in the power of effectively using all emotions in leadership. It’s been almost 55 years since Dr. Martin Luther King, Jr.’s gave what I believe is one of the Top-3 Speeches of all-time, the “I have a Dream” speech, I would like to use a recent excerpt about Dr. King on Leadership.

Automotive employers leaders focus on results, and that’s it. Good leaders focus also on the behaviors that will get results. And great leaders focus, in addition, on the emotions that will drive these behaviors. One emotion that shapes our behavior is anger, and Martin Luther King Jr., whose 84th birthday we commemorate today, knew of the power that came packed in this emotion. King had reason enough to be provoked, time and again. He was physically threatened and attacked by bigoted people, repeatedly jailed by state authorities (sometimes on trivial traffic violations), harassed by the FBI and even vilified by fellow black leaders who preferred more aggressive forms of resistance.

In his autobiography, King wrote about this incident that occurred in 1943: “When I was 14, I traveled from Atlanta to Dublin, Georgia with a dear teacher of mine, Mrs. Bradley (to) participate in an oratorical contest. We were on a bus returning to Atlanta. Along the way, some white passengers boarded the bus, and the white driver ordered us to get up and give the whites our seats. We didn’t move quickly enough to suit him, so he began cursing us. I intended to stay right in that seat, but Mrs. Bradley urged me up, saying we had to obey the law. We stood up in the aisle for 90 miles to Atlanta. That night will never leave my memory. It was the angriest I have ever been in my life.”

Great leaders often have a strong capacity to experience anger. It wakes them up and makes them pay attention to what is wrong in their environment, or in themselves. 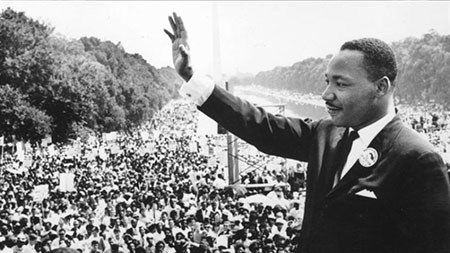 Without anger, they would not have the awareness or the drive to fix what is wrong. But, they also know the downside of anger, and wage a firm battle to tame it within themselves. One such moment for King came when, in December 1955, he led talks with the authorities in Montgomery, Alabama on negotiating the end of the bus boycott that was hurting both whites and African Americans. He realized that the whites were not ready to give up their segregation privileges, the talks were heading for a stalemate, and, what was more, the other party was trying to portray King as the sole stumbling block to an agreement.

“That Monday I went home with a heavy heart,” he wrote in his autobiography. “I was weighed down by a terrible sense of guilt, remembering that on two or three occasions I had allowed myself to become angry and indignant. I had spoken hastily and resentfully. Yet I knew that this was no way to solve a problem. ‘You must not harbor anger,’ I admonished myself. ‘You must be willing to suffer the anger of the opponent, and yet not return anger. You must not become bitter. No matter how emotional your opponents are, you must be calm.'”

Only by taming his own anger did King earn the right to become a messenger of peaceful struggle to the people of the nation. An acid test came his way on a night in 1956 when his home in Birmingham, Alabama was bombed by white extremists. In his autobiography, he wrote: “While I lay in that quiet front bedroom, I began to think of the viciousness of people who would bomb my home. I could feel the anger rising when I realized that my wife and baby could have been killed. I was once more on the verge of corroding hatred. And once more I caught myself and said: ‘You must not allow yourself to become bitter’.”
That night, he didn’t just quell his own stirring for vengeance, but also that of the restless and roused masses who were outside his house, angered and ready to strike a blow at the establishment until they were soothed and moved by his words: “We are not advocating violence. We want to love our enemies. I want you to love our enemies. Be good to them. Love them and let them know that you love them.”
But don’t get me wrong. In these moments, he wasn’t trying to crush his anger, or that of his people. He was trying to channel it into a higher purpose.

In September 1962, as King sat on the stage during an Southern Christian Leadership Convention, a white member of the Nazi party jumped up to the podium and punched him several times in the face. As the security guards rushed to his help and pulled away the hate-filled youth, King responded, calmly, that he would not press charges. In response, he said in Martin Luther King on Leadership: “The system that we live under creates people such as this youth. I am not interested in pressing charges. I’m interested in changing the kind of system that produces this kind of man.”

Great leaders do not ignore their anger, nor do they allow themselves to get consumed by it. Instead, they channel the emotion into energy, commitment, sacrifice, and purpose. They use it to step up their game. And, they infuse people around them with this form of constructive anger so they, too, can be infused with energy commitment, sacrifice and purpose. In the words of King in Freedomways magazine in 1968, “The supreme task [of a leader or automotive employer] is to organize and unite people so that their anger becomes a transforming force.”

As I’ve said frequently, anger is a great motivator if this strong emotion is put to good use!

Have a great week!

Rick Sorrells
I can relate to that!