Man, oh man, oh man. What a crazy couple of weeks we’ve had before us?

First, all of our friends in Texas and then Irma. She was a tough lady on auto jobs! It will take us a few more days to get back to normal, but all the best to our teammates around the state of Florida for juggling all that we’ve juggled.

In preparing to write my update this week, I immediately thought of one that I published a few years ago. It’s about a current Senior at the University of Michigan and as you know, my oldest is also a Senior at Michigan. I first wrote this Update 3 years ago when they were both Freshmen.
Tragedy will never be fully behind Austin Hatch. But, he showed again Wednesday that he has not lost hope — whether or not he ever becomes a high level basketball player again. “I feel like there’s a plan for my life.” 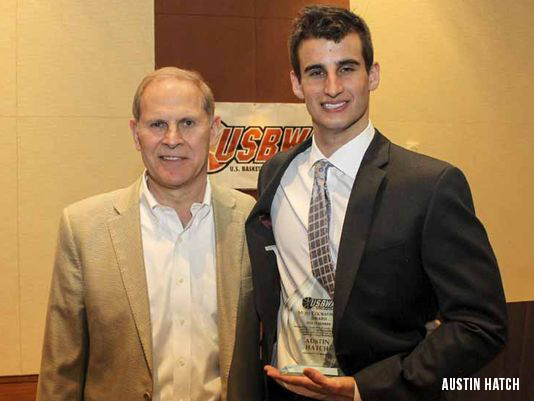 Surviving two plane crashes will make one feel like that. In June 2011, Hatch was a passenger in a small plane, piloted by his father, that crashed. His father and stepmother were killed. Hatch survived — although he had a traumatic brain injury, a broken collarbone and a punctured lung — after being placed in a medically induced coma for eight weeks. Incredibly, it was the second time Hatch had survived a crash. Eight years earlier, his father was the pilot in another crash. Hatch’s mother and two siblings were killed in that one.
When Hatch awoke from his coma after the second crash, it took him a while to process that he had lost his family. “I was dealing with the loss of my best friend, my coach, my teacher, my mentor and my No. 1 fan — that same man was also my father, Dr. Stephen Hatch,” he said. “He taught me everything — the work necessary to succeed, faith, determination and courage in the midst of hardship. Those traits I acquired from him are what saved my life.” The second crash came two weeks after Hatch, a 6-6 wing man at Fort Wayne (Ind.) Canterbury High School, who had verbally committed to play basketball at Michigan. He did not play in a competitive basketball game for over 2 years after the crash. His recovery, physically, emotionally and mentally has been slow but steady. He spoke Wednesday calmly, confidently and articulately but said he is not where he once was in terms of cognitive ability.

“A lot of people have said my recovery is kind of a miracle,” he said. “But you have to remember the significance of what I’ve been through. I had a traumatic brain injury.” After the 2nd accident, Hatch moved from Indiana to Pasadena, Calif., to live with an uncle’s family and to finish his recovery. Amazingly, Michigan honored Hatch’s original basketball scholarship commitment. Coach John Beilein “told me that he wouldn’t offer me a scholarship if he didn’t think I had a role on the team that would help them win,” he said. ” He said, ‘Austin, whatever you are able to do, whether it be a manager or a practice player or whatever, you’re on scholarship no matter what.”

Neither of those tragedies, however, is what makes Hatch courageous. It’s because of how he’s lived his life since, fighting to overcome both his own physical hardships and emotional challenges, and also embracing his new opportunities. Rather than be angry at what he’s lost, Hatch instead prefers to celebrate what he’s been given – a chance to honor his parents by becoming the man they dreamed he would be. Fiercely determined and impossibly positive, Hatch believes he is only beginning to write the story of his life and that the tragedies, while a part of his tale, will one day merely be a footnote.
After I first heard the story, I asked my son and he said, “yeah Dad, he’s a bad-a#$!” I said, “what do you mean?”

Jimmy responded, “Dad, he’s the toughest 19 year old kid I’ve ever heard of and mature beyond his years.” This statement was really interesting to me. I immediately made a mental note that this would be the future subject of a Weekly Update. In preparation for writing this Update, I engaged in some research on what it means to be Tough. What’s does it mean? It’s really quite a word. It doesn’t mean swaggering, sneering, or being hard-boiled. Take a look at Webster’s definition: TOUGH: Having the quality of being strong or firm in texture, but flexible and not brittle, yielding to force without breaking; capable of resisting great strain without coming apart. To have resiliency under the application of force and not break apart, to have good substantial texture of personality, that is to be tough in its upper level meaning.

To get this way depends in part on how you think, whether with weakness or strength, timorousness or fearlessness, hesitancy or forthrightness; add toughness to your MA (mental attitude) and you’ve got a mixture that is something special, very special. When you are tough-minded, you can endure strain and not break apart in your thoughts. Being tough isn’t only a physical thing, it’s actually more mental than physical strength. After reading a few articles and researching Webster’s, I fully got what my son Jimmy was saying. Austin Hatch is a Bad-a#$…he’s tough not just because of what he has gone through physically, but even more importantly what he has gone through mentally and he’s stronger for it. He’s chosen to celebrate what he has vs. what he does not have. This has made him fiercely determined and impossibly positive on life.