It’s not okay to let a customer have it, because they were rude or look for ways to show the customer it was their fault…

One of the exciting things about Pinnacle’s future is our ability to plow new fields…to pave new paths…to create jobs in the automotive industry! An area where we have to “plow new fields” or “to create” is in the area of Dealership CSI. Building a strong brand in this space is critically dependent upon Pinnacle’s ability to both move Dealership CSI and the Dealership knowing that we were primary drivers in this improvement. It has to be crystal clear to the Dealership that the improvement came from us. Everyone has to move from thinking of ourselves as a staffing company and, instead, think of Pinnacle as a Hospitality or Customer Experience company. 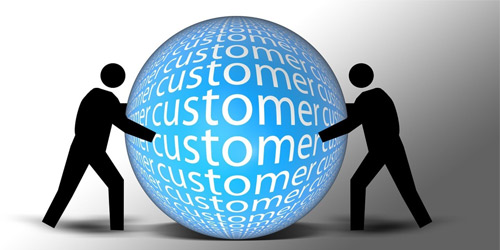 Sounds simple, right? I recognize it’s not simple. There are actually lots of steps and many of them are hard, but I also believe it’s very doable. We just have to start and the place to start for many of us is our mindset. What holds many of us back from success is us.

Twenty-five years ago, I had a boss at Cintas who was considered one of the company’s most talented up & comers. His name was Bill. I was hired by Bill as a Sales/Service Manager. I was sent to work for him, because he was considered to be one of the toughest, but best developers of talent. Fiscal Year 1993 (I know, many of you were still in grade school) was a very difficult year for the Cintas location where I worked, because we were struggling through a large, difficult acquisition and the aftermath of hurricane Andrew. Although we were doing well financially and were considered the best in town, our service to our customers was mediocre at best. We blamed this on the acquisition, the weather, snowbirds coming from the north to retire, New Yorkers, etc., …but the real problem was us, our attitude…..and it started at the top! Bill would tell you today that he was the problem. Comments and actions of disrespect towards our customers were tolerated, even encouraged. Things like,

• being nice to the customer unless they were rude to us, then it was okay to let them have it right back.

• if a customer made a mistake, we were going to make sure they knew it was their fault. If they just understood our procedures, then this never would have happened.

• we loved to interrogate every customer who called because we had to be absolutely certain they weren’t just trying rip us off! We interrogated (and pissed off!) the 200 to find the one who really was trying to get something from us.

• we referred to the habitual callers as “jerks” or worse.

Even worse, Bill was well-known through-out the Cintas organization as a whiner regarding CSI. He constantly fought how the shops were done, who did the shops, when they did them, whether they were accurate, how the math was done, whether they were statistically relevant, etc., etc., etc. Then something happened, Bill changed his attitude….and with that there was a miraculous change in the location’s attitude. The change didn’t happen overnight, it was a gradual thing….but change did occur. The location’s Customer Service Index moved from the low 50’s to the 70’s (the Corporate average was in the low 60’s), which is where it stayed for years.

What happened here? Did customers quit making mistakes? Did they suddenly become experts in Cintas procedures? Did every customer who called the location begin to use only pleasant tones and become sweet as pie? Obviously, the answers are all no. Bill finally decided that we were going to recognize that customers are going to make mistakes. It was our job to fix the problem first, and then work with the customer to keep them from shooting themselves in the foot in the future. We began to recognize that if a customer lost their temper or became frustrated, the way to impress them was to listen, let them vent, show empathy, apologize for the situation, find out exactly what we needed to do to get them happy, tell them what you would do to fix it, get their agreement that your plan was okay, and thank them for their business. Suddenly, after a few calls with this approach, previously frustrated customers became friends. Friends are more tolerant when mistakes occur. Additionally, they are far less likely to get nasty and rude like we many times do with strangers.

Once Bill decided to stop fighting the system and completely focus his efforts toward improving the metric, the metric started to go up. I believe what Bill did in CSI and his move from being part of the problem to becoming a key champion of improvement played a major role in moving Bill’s career to the next level. Without this change in attitude, it is quite possible that Bill would still be in his same position. Instead, he is one of the top operational executives in a $8 billion company. Bill has accomplished much since that change.

As I said above, at Pinnacle we are trying to plow new fields in the area of CSI. In many cases, the customer doesn’t even share the CSI information except when there is a bad one or when the scores are down for the week or the month. But, it’s our job to figure out how to get this information and to share with our customers why we need it. Once we start to get this information, I know that progress will not happen overnight, but I’m confident that if we believe we can make progress…we will. If you only believe they are tough and the CSI is unfair, then that’s all they will be. Take a lesson from Bill. If the leader believes it can happen, then that is 90% of the battle.

So, I want everyone to hear from Rick. It’s not okay to let a customer have it, because they were rude or look for ways to show the customer it was their fault. Even if it was, we will work for ways to help them not make these mistakes in the future. If you ever hear me call our customers “jerks”, then call me out! Having a documented, proven ability to drive improvements in the Dealership’s Customer Experience is one of the key things that will establish Pinnacle as the premium, dominant brand in this space. It will get us more new customers, allow us to keep more existing customers, and will get us more business from these existing customers. This will happen after we’ve built a track record of doing this in dozens of dealerships. But, it just takes one to start. This just takes one leader with the right attitude. Let’s vow to all make this start today!

Have a great week.