My eyes were awake, but the rest of me wasn’t.
There is an Update that I have used since 2006. This particular Update was about my oldest son who would have been about 10 years old at the time. In 2006, Sunday mornings are particularly tough, because my kids had early morning Sunday school. While I am an early morning guy, this is not a trait that has been inherited by the rest of my family. On one particular Sunday, I was kidding Jimmy about being a “sleepy-head” and he said, “Dad, I just couldn’t wake myself up. “My eyes were awake, but the rest of me wasn’t.” This is a statement that has stuck with me for years and I was reminded of this story when attending a speaker series this week.

I periodically attend a CEO Group speaker series here locally in Tampa to improve our automotive job listings. This week’s speaker was Isaac Lidsky who has written a book called Eyes Wide Open. Isaac is an impressive speaker and has led an extraordinary life. He studied math and computer science at Harvard, graduating at age 19, then went to Harvard Law and clerked for two Supreme Court justices. Many of my age might remember Isaac as a child actor who had the role of Barton “Weasel” Wyzell on “Saved by the Bell in the 90’s. 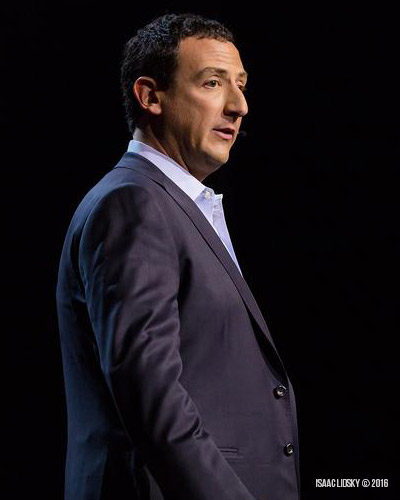 Isaac also is a very accomplished business person taking a company from $10m-$150m in 6 years and is married with 4 beautiful kids. What most wouldn’t know from this description is Isaac is blind. At age 13, he was diagnosed with retinitis pigmentosa. “The doctor said, ‘You will go blind. There are no cures, and we don’t know much about the disease. Good luck!’” Isaac was terrified. “I knew going blind would ruin my life.” The disease progressed gradually and he lost his sight entirely by age 23. Regardless of the pun, he says that he lived a really dark life until going completely blind. Let that sink in…he believes he lived a dark life before he was blind, not after!

Isaac says that of all the amazing experiences along his path, “In many ways, one of the greatest things that ever happened to me was going blind.”

Things changed when he met with a low-vision rehabilitation specialist. She was completely focused on practical solutions that he could use to navigate life without vision, and he realized, “Everything I thought I knew about blindness was a fiction born of my fears. I was so busy worrying about some awful future that I wasn’t taking care of the moment, now. There only is now, today, this moment, and I chose to take control of my reality.”

Isaac said “I lost my sight, but I gained an empowering vision,” Blindness prompted him to realize that he could choose how to live and who to be: “I chose to live a blessed life.” Isaac said that “he lost his sight, but in return he got vision. I’ve learned that worse than being blind is having sight with no vision.”

Isaac has a number of key messages, but one key message is that there are always going to be critics. Sometimes the toughest critic is yourself and the fears that you face about yourself. It’s paralyzing, causes inactivity, and allows you to abdicate responsibility. As he said above, the way to face your fears or critics is to have a clear vision of exactly what you want with your life, your career, your business, etc.. During his speech, he used a great quote from Teddy Roosevelt that I wanted to share.

“It is not the critic who counts; not the man who points out how the strong man stumbles, or where the doer of deeds could have done them better. The credit belongs to the man who is actually in the arena, whose face is marred by dust and sweat and blood; who strives valiantly; who errs, who comes short again and again, because there is no effort without error and shortcoming; but who does actually strive to do the deeds; who knows great enthusiasms, the great devotions; who spends himself in a worthy cause; who at the best knows in the end the triumph of high achievement, and who at the worst, if he fails, at least fails while daring greatly, so that his place shall never be with those cold and timid souls who neither know victory nor defeat.”

The life of a person (and any worthwhile organization) is a journey that requires lots of change, which is hard for us all. But, without change, we would go through life where “my eyes are awake, but the rest of us isn’t.” So, that next curve ball you get today, let’s all relish it. Figure out how to hit it, then move on to the next pitch. That’s what it means to have your Eyes Wide Open!

Also, thank you to all of our Veterans and especially those Veteran families who have made the ultimate sacrifice. We are deeply indebted.

Have a great week.

Rick Sorrells
Just as blind as the next guy!