“Oh bull—-!” she said. “He hit a horse.”
This is another one of my favorite annual Weekly Updates. Evidently, it is a true story. I apologize in advance that it is a little long, but I think you’ll like it so hopefully will hang with me as it can relate to automotive employment opportunities. This is a cool and inspirational story, but this week, I have another special reason for sending this message…Safety and Claims.

Did you know that UPS trucks never take left-hand turns. By favoring right-hand turns at all times — the carrier saves millions of gallons of fuel each year, and avoids emissions equivalent to over 20,000 passenger cars. The practice started decades ago, before computers and GPS, and is now managed by a software that conjures the most efficient route for each truck.
What’s wrong with turning left?

Left-hand turns are generally considered unsafe and wasteful on right-hand driving roads, such as those in the US. “Left-turning traffic typically has to turn against a flow of oncoming vehicles,” explains Tom Vanderbilt, author of the book “Traffic: Why we drive the way we do.” “This can not only be dangerous, but makes traffic build up, unless you install a dedicated left-turn ‘phase,’ which is fine but basically adds 30 or 45 seconds to everyone else’s single time,” he said. A study on crash factors in intersection-related accidents from the US National Highway Traffic Safety Association shows that turning left is one of the leading “critical pre-crash events” (an event that made a collision inevitable), occurring in 22.2 percent of crashes, as opposed to 1.2 percent for right turns. About 61 percent of crashes that occur while turning or crossing an intersection involve left turns, as opposed to just 3.1 percent involving right turns. Left turns are also three times more likely to kill pedestrians than right ones.

My father never drove a car. Well, that’s not quite right. I should say I never saw him drive a car. He quit driving in 1927, when he was 25 years old, and the last car he drove was a 1926 Whipper. “In those days”, he told me when he was in his 90’s “to drive a car you had to do things with your hands, and do things with your feet, and look every which way, and I decided you could walk through life and enjoy it or drive through life and miss it.’

At which point my mother, a sometimes-salty Irishwoman, chimed in, “Oh bull—-!” she said. “He hit a horse.” 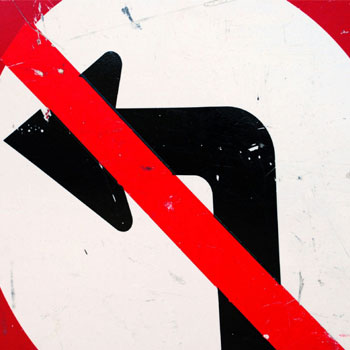 So my brother and I grew up in a household without a car. The neighbors all had cars – the Kollingses next door had a green 1941 Dodge, the Van Laninghams across the street a gray 1936 Plymouth, the Hopsons two doors down had a black 1941 Ford – but we had none!

My brother, David, was born in 1935, and I was born in 1938, and sometimes at dinner, we’d ask how come all the neighbors had cars but we had one. “No one in the family drives,” my mother would explain, and that was that.

But, sometimes, my father would say, “But as soon as one of you boys turns 16, we’ll get one.” It was as if he wasn’t sure which one of us would turn 16 first. But, sure enough, my brother turned 16 before I did, so in 1951 my parents bought a used 1950 Chevrolet from a friend who ran the parts department at a Chevy Dealership downtown. It was a four-door , white model, stick shift, fender skirts, loaded with everything, and since my parents didn’t drive, it more or less became my brother’s car.

Having a car but not being able to drive didn’t bother my father, but it didn’t make sense to my mother. So in 1952, when she was 43 years old, she asked a friend to teach her to drive. She learned in a nearby cemetery, the place where I learned to drive the following year and where, a generation later, I took my two sons to practice driving. The cemetery was my father’s idea. “Who can your mother hurt in the cemetery?” I remember him saying more than once.

For the next 45 years or so, until she was 90, my mother was the driver in the family. Neither she nor my father had any sense of direction, but he loaded up on maps – through they seldom left the city limits – appointed himself navigator. It seemed to work.

Still, they both continued to walk a lot. My mother was a devout Catholic, and my father an equally devout agnostic, an arrangement that didn’t seem to bother either of them through their 75 years of marriage. (Yes, 75 years, and they were deeply in love the entire time.)

He retired when we was 70, and nearly every morning for the next 20 years or so, he would walk with her the mile to St. Augustine’s Church. She would walk down and sit in the front pew, and he would wait in the back until he saw which of the parish’s two priests was on duty that morning. If it was the pastor, my father then would go out and take a 2-mile walk, meeting my mother at the end of the service and walking her home.

If it was the Assistant Pastor, he’d take just a 1-mile walk and then head back to the church. He called the priests “Father Fast” and “Father Slow”.

After he retired, my father almost always accompanied my mother whenever she drove anywhere, even if he had no reason to go along. If she were going to the beauty parlor, he’d sit in the car and read, or go take a stroll or, if it was summer, have her keep the engine running so he could listen to the Cubs game on the radio. In the evening, then, when I’d stop by, he’d explain: “The Cubs lost again. The millionaire on second base made a bad throw to the millionaire on first base, so the multimillionaire on third based scored.”

If she were going to the grocery store, he would go along to carry the bags out – and to make sure she loaded up on ice cream. As I said, he was always the navigator, and once, when he was 95 and she was 88 and still driving, he said to me, “Do you want to know the secret to a long life?”

“I guess so,” I said, knowing it probably would be something bizarre.

“No left turns,” he repeated. “Several years ago, your mother and I read an article that said most accidents that old people are in happen when they left turn in front of oncoming traffic. As you get older, your eyesight worsens, and you can lose your depth perception, he said. So, your mother and I decided to never take left turns.

“What?” I said again. “No left turns”, he said. Think about it. Three rights are the same as a left, and that’s a lot safer. So, we always make three rights.

“You’re kidding!” I said and turned to my mother for support. “No,” she said, “your father is right. We make three rights. It works.” But, then she added: “Except when your father loses count.” I was driving at the time and almost drove off the road laughing.

“Yes,” my father admitted, “that sometimes happens. But, it’s not a problem. You just make seven rights, and you’re okay again.” I couldn’t resist. “Do you ever go for 11?” I asked. “No,” he said. If we miss it at seven, we just come home and call it a bad day. Besides, nothing in life is so important it can’t be put off another day or another week.” My mother was never in an accident, but one evening she handed me her car keys and said she decided to quit driving. That was in 1999, when she was 90! She lived four more years, until 2003. My father died the next year, at 102.

They both died in a bungalow they had moved into in 1937 and bought a few years later for $3,000. (Sixty years later, my brother and I paid $8,000 to have a shower put in the tiny bathroom – the house had never had one. My father would have died then and there had he knew the shower cost nearly 3x what he paid for the house.) He continued to walk daily – he had me get him a treadmill when he was 101 because he was afraid he’d fall on the icy sidewalks but wanted to keep exercising – and he was of sound mind and sound body until he died.

One September afternoon in 2004, he and my son went with me when I had to give a talk in a neighboring town, and it was clear to all three of us that he was wearing out, though we had the usual wide-ranging conversation about politics and newspapers and things in the news. A few weeks earlier, he had told my son, “You know, Mike, the first hundred years are a lot easier than the second hundred.” At one point in our drive that Saturday, he said, “You know, I’m probably not going to live much longer.”

“You’re probably right,” I said. “Why would you say that?” He countered, somewhat irritated. “Because you’re 102 years old,” I said. “Yes, you’re right,” he said. He stayed in bed the whole next day.

That night, I suggested to my son and daughter that we sit up with him through the night. He appreciated it, he said, though at one point, apparently seeing us looking gloomy, he said: “I would like to make an announcement. No one in this room is dead yet.”

An hour or so later, he spoke his last words: “I want you to know that I am in no pain. I am very comfortable. And, I have had as happy a life as anyone on this earth could ever have.” A short time later he died.

I miss him a lot, and I think about him a lot. I’ve wondered now and then how it was that my family and I were so lucky that he lived so long. I can’t figure out if it was because he walked through life, or because he quit taking left turns.

Life is too short to wake up with regrets. So, love the people who treat you right. Forget about the ones who don’t. Believe everything happens for a reason. If you get a chance, take it, and if it changes your life, let it. Nobody said life would be easy; they just promised it would most likely be worth it.

So, two things. First, I want to reiterate our company’s policy of NO LEFT TURNS. When an associate ask why, feel free to either use the UPS story or use this gentlemen’s story about his Dad. We want them to live until they are 100! When a customer argues about our policy, feel free to do the same.

Second, what a powerful message about life.

Life is too short to wake up with regrets.
Love the people who treat you right.
Forget the ones who don’t.
Believe everything happens for a reason.
If you get a chance, take it. If it changes your life, let it.
Nobody said life would be easy; they just promised it would most likely be worth it.

Again, my apologies for the length, but this story really resonates with me every time I read it. Such a simple story about the simple things of life. Enjoy life…it definitely has an expiration date. Read throughout the rest of our blog posts for more news and stories about automotive employment opportunities.

Have a Great Week!!!